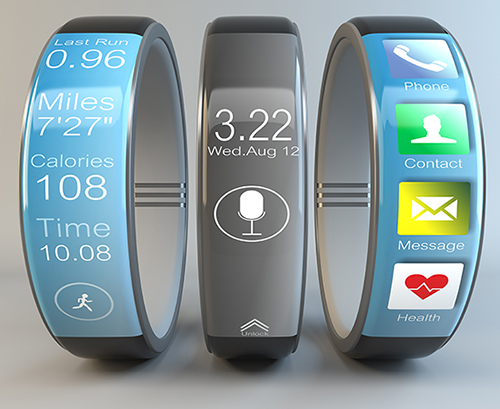 The Apple Watch has been the trailblazing product that has opened up a new market for wearable smart products, a growing, and increasingly common area of technology. Apple, Samsung, & Microsoft have recently filed patent applications for a ‘Smart Ring’ wearable product. An increase in small Kickstarter companies focusing on ‘Smart Ring’ products, fashion, and technology is fueling a drive for improvements on wearable technology. Currently, most ‘Smart Ring’ products on the market are basic and thus, there are many opportunities for future innovation. Expect to see more advancement in wearable tech while merging with the fashion industry and a decrease in the open space for patenting. Wearable tech or jewelry that fits in the ‘Smart Ring’ price range may be disrupted.

The current ‘Smart Ring’ products available are produced mainly by Kickstarter companies. There are quite a few of these companies holding the market and some of them have attracted attention elsewhere. Ringly, for example, has raised $5.1 million from venture capitalists after the pre-sales were finished. 16lab, a Japanese startup, has also attracted venture capital. The products currently produced contain basic functionality that may replace certain features found in other wearable products. The majority of ‘Smart Ring’ products act as an alert system that prevents the user from having to check their smart phone as frequently as we currently do (150 times per day says a study by Kleiner Perkins Caufield and Byers). DOI Smartring by MOTA is an updated pager which alerts the user when a call, text, email, or other way of communication comes through to the user’s smart phone. This seems to be the current trend for ‘Smart Rings’ until someone disrupts the market, which will happen sooner rather than later.

Ring by Logbar, a Japan based company, has gesture recognition and is able to connect to any smart device. Its gesture recognition, LED light, and vibration make up the user interface that boost Ring past a basic alert system device. Logbar has filed several patent applications for a “gesture input device”. If the patent applications are published, it should give Logbar more time for innovation to improve Ring, but with Samsung and Apple’s recent interest in ‘Smart Rings,’ Logbar and other companies interested in this space should hurry.

While most of the ‘Smart Ring’ products focus on the tech aspects, Ringly has been looking at the ‘Smart Ring’ as a fashionable tech. Although their product only alerts the user when an important message has been received, their patent application describes it as “a mobile communication device that comprises a fashion accessory and a signaling assembly”. With the merging between the fashion and tech markets, smaller companies like Ringly will have to be strategic about creating their IP and how they focus their innovation around their new products.

It was an opportunistic move by Ringly to mix their previous knowledge of jewelry with technology. Both Apple and Samsung’s patent applications are similar in that they reference previous granted, tested, and accepted technology that they currently use. Apple’s patent application for their “Devices and Methods for a Ring Computing Device” consist of a touch screen and various sensors that pick up user commands to communicate with the user, much like the Apple Watch. Samsung’s application references back to their rotatable bezel that was on the Gear S2. Both companies have managed to maintain a user interface ability while on their respective smart watches, but will they be able to keep that same user-to-device communication while on an even smaller surface area like a ring?

What’s next? Although these are only patent applications, which do not reveal Apple or Samsung’s product development plans, it means the ideas are in motion. Companies like Ringly and Logbar may have more freedom to create and design, unlike their larger competitors. Another problem for all smart wearables is the cosmetic appeal. These products can’t simply be hidden in a pocket, they are visible at almost all times.

In terms of future intersections, hand wearables may find applications within the healthcare industry as a means to help manage the “big five” of chronic disease and/or improve upon existing medical technologies (e.g., connecting cellular phones with hearing aids). Further areas of wearables innovation are likely to address other segments such as connected/smart buildings or automobiles.  Samsung’s recent patent application suggests that a smart ring could control a TV, radio, blinds, lights or other connected devices in a smart home.

All companies are walking a fine line as they merge and innovate this new product. The open spaces are quickly filling up. Proper care has to be taken to guard the innovation process to maintain an open space for the newest smart wearables to flourish. Any company, large or small, should be alert and constantly innovating to keep a competitive edge when addressing this market.