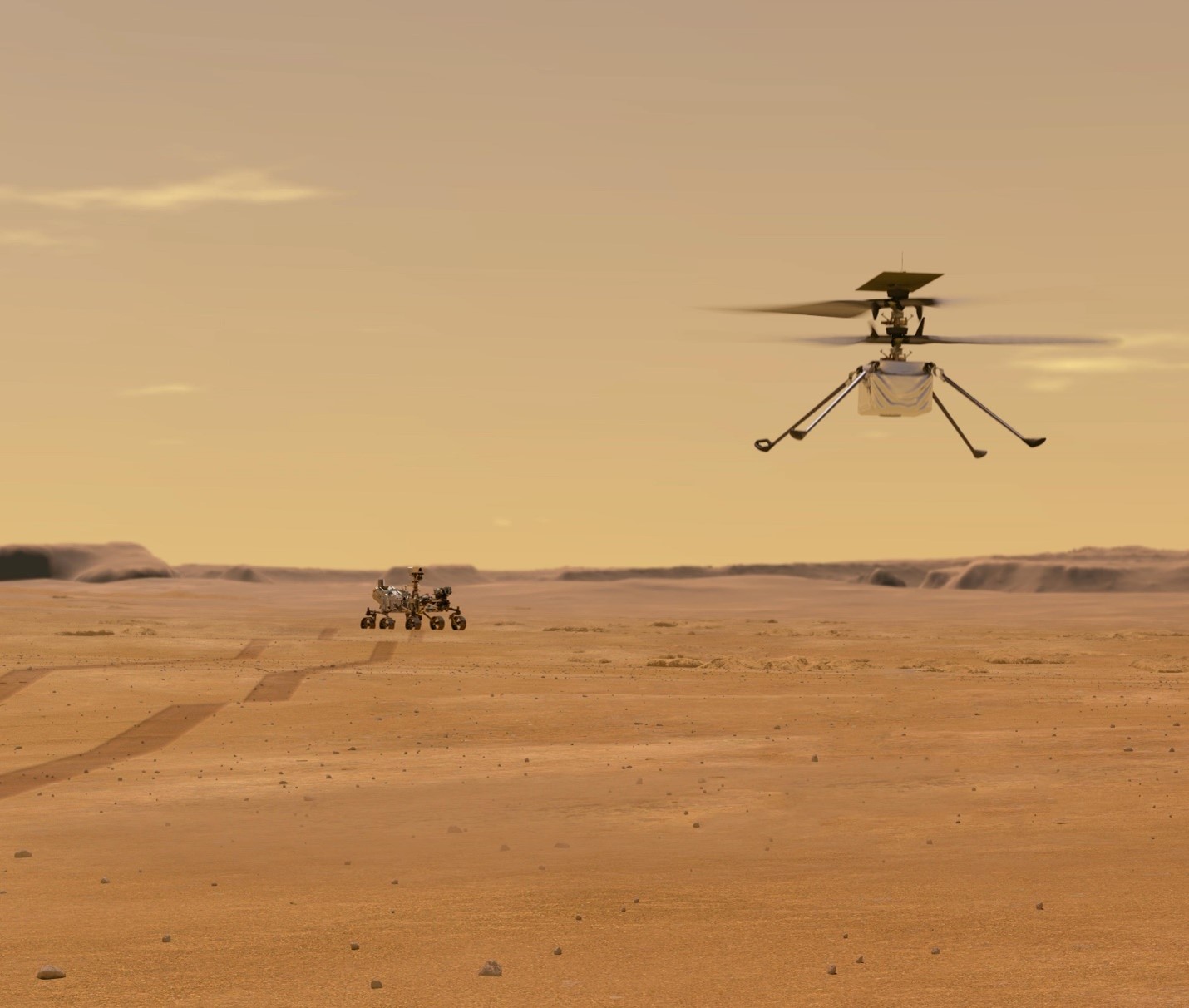 For the first time in human history, an unmanned aerial vehicle (UAV) has flown on another planet. NASA’s Mars Helicopter, named Ingenuity, has taken flight over the Red Planet. This astounding accomplishment has deep implications for humanity’s future as an interplanetary species. And it was all made possible by the power of invention.

Leaving in the summer of 2020 and landing on Mars in early 2021, the Mars helicopter has been thoroughly tested. While the first successful flyby of Mars occurred in 1964, 2021 will mark the year we flew on Mars, not just to Mars! The first Ingenuity flight was just 10 feet high and lasted only 40 seconds.

Wright Brothers to Ingenuity: A New ‘First in Flight’

Remember the Wright Brothers? Orville and Wilbur Wright were the two American aviation pioneers who invented, built, and flew the world’s first successful motor-operated airplane. The “Wright Flyer,” took off at Kitty Hawk, North Carolina in December of 1903. The inaugural flight lasted only 12 seconds and covered just 120 feet! This story all sounds so familiar. In merely 118 years, just over one lifetime, we have gone from first flight on Earth to first flight on Mars. This timeline demonstrates the rapid rate of technology advancement in aerospace.

More Martian Flights on the Horizon

The Ingenuity team at NASA is preparing for its sixth mission in the coming weeks. Ingenuity’s flight plan begins with a 30-foot ascent before heading out on a 500-foot aerial trip. Then, Ingenuity will take color stereo pictures, which may aid in future missions and further our understanding of the Martian surface. Ingenuity is expected to fly for 140 seconds. Ingenuity has had five increasingly complex flights and remains in good shape. So far, Ingenuity has been used to see if we can fly on Mars, taking on dual roles as a communications relay station and a planetary videographer.

According to NASA, Ingenuity may become even more ambitious as the Perseverance rover takes up its primary mission: searching for water and fossils. Ingenuity can help by looking for areas to focus on from overhead video surveillance of the ground. As a team, Perseverance and Ingenuity can work nearly two-thirds of a mile away from each other while maintaining communications.

This is just the beginning. Imagine the software for autonomous robot teams that could be developed to enhance discoveries. For instance, images from Ingenuity could be taken and fed to Perseverance. Perseverance decides to sample 4 different areas based on the images and may even find fossils in one area. Then, Perseverance tells Ingenuity to find another location of the same type as the area where the fossil was located. Back and forth, the team gets more productive and smarter, delivering more useful analysis data to Earth compared the painstaking efforts to control the team remotely. Undoubtedly, experts in artificial intelligence and machine learning are already working on the future of these autonomous teams.

Just like our helicopters on Earth, Ingenuity and future Mars helicopters can be used for maintenance, security, rescue, mapping terrain, and the like. Here on Earth, drones are enabling new business models by dropping off and picking up packages. On Mars, drones should be able to simply fly to new locations, grab objects of interest and bring the sample back to the rover for analysis.  A Mars helicopter could even drop off communications repeater devices to increase the range it can send and receive messages. Ingenuity could even use solar-powered batteries placed at intervals to recharge, increasing the flight range. With a longer range and extended communications, NASA could gather data on Mars like never before.

Of course, increasing Ingenuity’s range is one thing, but how about scaling Ingenuity up? Back on Earth, engineers are working tirelessly to create viable passenger drones. Could we start shuttling around astronauts or equipment on other planets? Or, we could go the other way by dramatically scaling Ingenuity down to a military-style nano-drone. We could produce hundreds of these nano-drones on Mars and use them in swarms. What if each nano drone was equipped with a different sensor, for measuring water, a particular optical range, or temperature. Imagine a small swarm of smart nano-drones assisting the rover in collecting samples and gathering 3D data of the terrain. The applications are endless.

The Inventions Needed to Make Ingenuity Fly on Mars

Mars’s atmosphere is about one percent as dense as Earth’s. This creates a challenge for flying on the Red Planet, as there are fewer molecules to push against (to create lift) on Mars. The helicopter blades have to spin faster (about six times the speed as on Earth) to compensate. It also means the helicopter blades are different (thicker near the rotor) to deal with increased vibrations.  These design changes came from years of research flying a small helicopter in a vacuum chamber.

NASA researchers discovered flying in a vacuum is counter-intuitive and near impossible for a human to control. In order to maintain flight in a vacuum, you need a computer in the pilot’s seat. Ingenuity uses a Qualcomm snapdragon 801 processor, like the one in the Galaxy S5. Ingenuity uses sensors with sophisticated algorithms to control itself. AI and machine learning are used to adapt the flight controls to the rapidly changing environment on Mars. Ingenuity is designed for a particular set of boundary conditions, providing just enough power and at the same time making sure Ingenuity is light enough to fly.

Ingenuity researchers also needed to solve the problem of the minimizing the weight of batteries connected to solar cells for charging. The power technology also needs a heating system to deal with temperature drops as low as -100o F on Mars. Another boundary condition solved with the power of invention.

Ingenuity can cover so much more area analysis by flight compared to previous expeditions. Think about it this way, the “Curiosity rover” took nine years to travel less than 25 kilometers. This equals an average speed of less than 0.0002 miles per hours. Ingenuity can cover some 500 feet in just over two minutes, moving at the comparatively breakneck speeds of 2.4 MPH (10,000 times faster than Curiosity).

We usually mention patents in our blogs to understand the protections beneath the inventions, but do patents apply when the system operates on Mars? How does that work?

Patent laws of a country only affect parties within that country’s “physical territories.” But international law stops countries from claiming any part of outer space as part of their territory.

The International Convention requires that systems launched into outer space are registered to a particular country. Once registered, the laws of the registering country (either the launch location or where the launch is “contracted from”) will cover the registered system. This process allows for some enforcement of IP rights for objects in outer space regarding where they are made, used, or sold while on Earth.

There have been legal strategies for companies to get around a competitor’s patent in a particular country by moving one or more steps of a process to a country where the competitor’s process is not patented. If, for example, there is some product assembly on Mars itself, this could be a novel way to get around technology patented on Earth. It may not be too farfetched to start thinking about all the new patent strategies that will take place once space becomes a viable location to manufacture products.

If we decide to assemble or even invent something on Mars, we may need different systems for patent protection. We are likely to have political boundaries on Mars, similar to the ones on Earth. But it is also possible there will be new countries that set up borders on Mars. Inventors in these Martian colonies may want to get patents they can enforce on both Earth and Mars. Eventually, the patent system may extend to other planets or moons.

The progress of human invention has given us rover and helicopter teams on remote planets designed for the mission and terrain. With innovative sensors, actuators, grippers, and the like, distributed amongst a robotic team, the possibilities for inventions are endless. Indeed, we can and will invent anything in our quest to become an interplanetary species. Who knows, maybe we can find a common-sense way to protect these legally to create the needed incentives to innovate.